Should I Translate My Board Game? 5 Questions to Ask Yourself

With the French and Spanish translations just released as print-at-home PDFs in The Story Engine store, I thought I'd reveal a peek behind the curtain on the translation process.

Translating a game can be costly and complicated, and we definitely ran into a couple of unanticipated challenges while translating the deck and its mechanics. That said, releasing the translations has opened up to a wider audience of users, as well as opportunities for language teachers to use The Story Engine to teach vocabulary and give fun, interactive writing or oral storytelling assignments.

I think the process we went through could help other game designers and other activity designers weigh the pros and cons of translating their products.

A quick "mileage may vary" disclaimer: while many tabletop gamers enjoy The Story Engine, it's not really a board game. It's more of a creative tool/activity deck with a lot of tabletop applications, and this makes it particularly well suited to translation and adaptation. Your experience with your board game may be different!

With that said, I'll walk you through our experience translating The Story Engine deck, and help answer the question: should I translate my board game? What factors you should consider when deciding to translate your game

One of the great joys of running The Story Engine Kickstarter was seeing word of the project spread to places I never thought to anticipate!

With that came the first requests to translate The Story Engine deck into different languages. The two biggest requests were for French and Spanish!

I thought about the process, and there were a few factors that I weighed heavily in my decision to go ahead with translations. If you are considering translating your tabletop game into another language, I would recommend you ask yourself the following 5 questions.

1) Is there a demonstrated demand for translations?

My rule of thumb is that if I receive a single request from a backer or customer, it's worth paying attention and seeing what I can do, but it might just be one person's preference.

If I receive multiple requests for the same thing, it means the community is trying to tell me about an opportunity to provide something they want. That's when I come up with a plan, or add it to my to-do list.

I received several requests for translations, and almost always in either French or Spanish, so I started tallying the requests to find out which languages are most popular. If you don't have the demand yet, starting an email list for people who want to be contacted when translations are ready is a great alternative.

2) Can I find qualified translators?

There are a lot of translators out there, but if you're on a tight budget, you want to be careful to find one can do the work at a fair rate without compromising on quality.

Luckily, I had two colleagues in mind for French and Spanish, which happened to be my most-requested languages. Let me introduce you to the translators of The Story Engine!

Cintain M. Quintana has years of professional translation experience, including work in the tabletop industry. Not only that, he is a writer and tabletop GM that I consulted while developing the deck, so he knew the spirit and mechanics of the deck from front to back. He also wrote a guest story for The Story Engine anthology.

Benoit Chartier is the founder of Trode Publications and a bilingual science fiction author whom I had shared a booth with at Ottawa Comic Con and become fast friends with.

He was a collaborator I had reached out to for a guest story for The Story Engine anthology who had published in both of Canada's official languages, so he was the first person I went to for help with the French translation.

3) Can I afford a translation with my budget?

When it came time to set a budget for translation, I did a quick assessment of my word count, including both my cards and the guidebook.

I found out that most translators charge by the word, and used standard translation rates to get a sense of my costs. 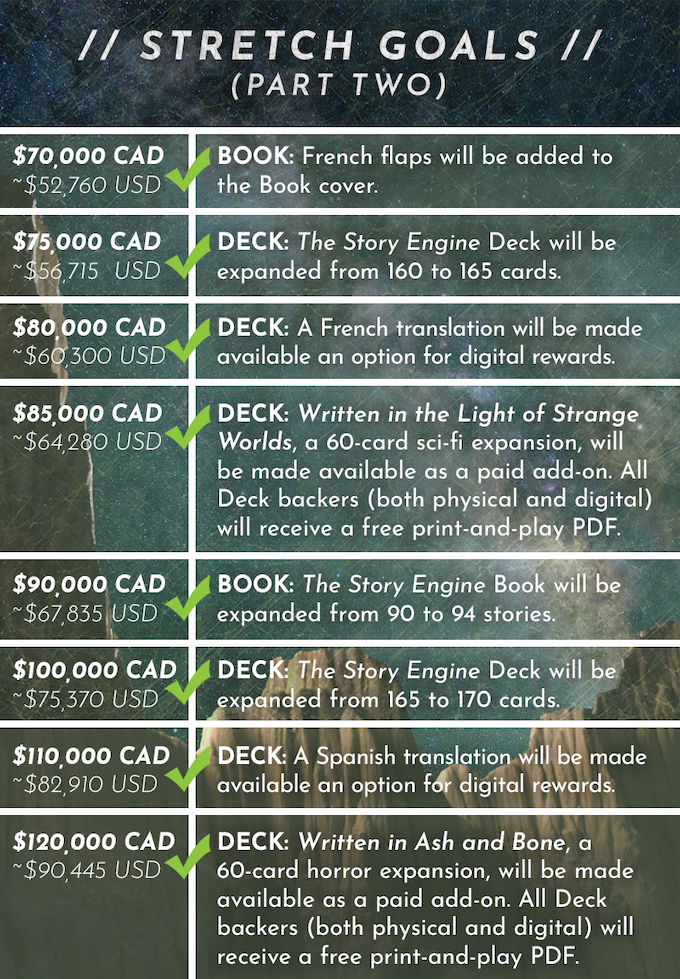 Because I had overfunded my Kickstarter goal, I was able to set each translation as a stretch goal that reflected both the cost and anticipated demand for translating into my most requested languages.

The cost of translations can vary by experience level, project complexity, and urgency, but a good ballpark to start budgeting is $0.12-$0.20/word.

(But please, definitely do your own research on current rates as they can vary!)

Note: I have heard mixed reviews on the idea of community-sourced translations. While I like the idea in theory, it can go wrong, and I think it's important to price the sale of your translations according to the assurance of the quality of the translation. In other words, if you didn't pay to assure a good translation, you should probably charge less.

One of the biggest expenses with tabletop production is manufacturing cost, and manufacturing in volume brings down the cost of producing each individual unit. With translations, it's hard to know in advance if a big print run will be worth it, so it helps if there is a digital version of your game to distribute instead. With digital products, you don't have to take on risk by producing a lot of units upfront, and you won't get stuck trying to find a place to store unsold units. Instead, you can assess the demand for a future printed version.

5) Will the translation be of interest to English speakers and/or language teachers?

This is a bit of a cheat that's specific to The Story Engine, but many tabletop games offer an experiential way to learn vocabulary. After all, you're more likely to remember a word after using it repeatedly and in context, as you do during a game. All the better if there's artwork and a theme to accompany the words and give clues to their meaning.

For The Story Engine, both Agent Cards and Anchor Cards feature photography and illustrations to offer clues as to what each word means, and the words are linked by a common theme. This, plus the ability to compare the English version to translations, and the fact that the deck itself can be used to create a writing exercise, make it an excellent tool for learning vocabulary. This broadens the audience to a new group of language learners and teachers.

BONUS QUESTION: Can I sell the rights to produce the translated game?

I don't have the answer to this one yet, but if you're interested in the right to manufacture and distribute a translation of The Story Engine, get in touch and we'll find out the answer together.

Overcoming the challenges of translating a game

A couple of interesting issues came up during the translation process!

For one thing, I discovered that the font designed the deck around did not have any support for letters with accents, which would be crucial for creating both the French and Spanish versions. I've designed custom fonts before but decided it would be more effective to switch the translations to a font that offered full support for accented letters.

Make sure your design elements support accents, or whatever is needed to make the translation work successfully.

The next issue was dealing with gendered nouns, which don't exist in English but are essential to the structure and grammar of both French and Spanish.

For a language-based deck system, this was crucial for us. With the Agent Cards, we decided to be inclusive and design with support for both the feminine and masculine versions of each word (wherever both versions existed). In both French and Spanish, adjectives must agree with the gender and singular/plural form of the noun they are describing, so we also needed to provide both forms for the Aspect Cards.

The bigger lesson with translating your tabletop game

What I learned from the process wasn't just about gendered nouns and subject-verb agreements.

The bigger lesson is this:

All in all, both translators were very happy with where we ended up after all was said and done, and the translations are now available in The Story Engine store.

In Spanish, you can currently order:

In French, we currently only have le paquete essentiel, but the expansions and boosters are on their way soon.

Both languages include high-quality print-and-play PDFs, as well as a very printer-friendly variant that's friendly for colourblind users and black-and-white printing.

The printer-friendly version, based on the designs for our free card creator webapp, will also soon be available in English to existing customers. Get your translation today!

If you are a game publisher interested in manufacturing and distributing The Story Engine deck, get in touch with us!